The Track-In System by Sikora GmbH is a programming tool for robot programs of KUKA and Fanuc robot controls. ABB control support is in development.

The system consists of the Mercator Software, a camera measuring bar called Tracker and a handheld programming tool called probe. These three components are sufficient to point out to the robot where the part is, how to get there and how to process it. 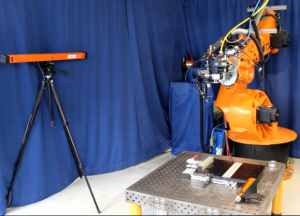 The Track-In System does not only simplify the robot programming, it also reduces programming times by about 70% compared to regular “Teach in” programming.

Thus the Track-In System enables anyone to generate robot movements including any kind of process with only a minimum of previous knowledge. With proper set-up even complex path- or point related processes like welding, laser brazing and adhesive bonding are easily integrated into production.

The position of the camera measuring bar in reference to the robot must be measured. This is possible in less than 10 minutes. Two methods are available:

– Reference Points:
At least three or more reference points that were made known to the system before.

– A Reference Robot Program:
The robot moves along a simple PTP-Path consisting of 8-10 points, and the Mercator-Software calculates the exact position of the Tracker by using so-called reference markers.

If CAD-Data for a specific part exists, this part needs to be positioned in the Mercator-Software. Three Reference Marker on the CAD-Part are to be alined with respective points on the real part.

Phase 1:
The seam programming is basically a description of the process on the part. The user points the programming tool to the parts areas that are to be processed by the robot. The geometry is described by setting individual points or by drag and drop. All relevant process parameters (speed, Offset, angle, signals) are set in the Mercator-Software.

Phase 3:
Check the program by clicking on the play button in Mercator. Transfer the robot program to the respective controller. 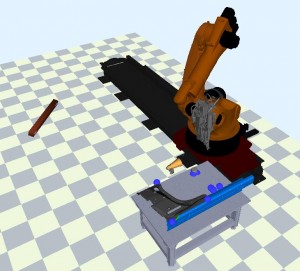 Track-In- Programming is usable in many ways. It is not limited to simple geometry description of the robot path, but also capable of describing the complete machining process. Both point and path related processes are programmed easily due to the two-step-concept of the Mercator Software.

For Track-In Programming no controller specific knowledge is needed. Only the program transfer and running the actual robot program requires basic knowledge of the respective controller.